Why am I coaching women with hair issues?

Being a bold girl means being an empowered woman that despite her condition can show off a look that makes her feel proud and self-confident.

Our mind raises many questions when something like TRICHOTILLOMANIA, ALOPECIA and CHEMO take away your hair.
And answers seem nowhere to be found.

When I was a teenager, I tried looking on the internet for possible tips on how to survive this period with dignity – at that time I didn’t know it would be a permanent baldness – and I could only find forums where people having the same problem poured their hearts out in order to find some comfort.

Today, other options that you find online are step-by-step guides describing all the tools I have been using myself. There are a few sites where videos are shown and you can read of these instructions freely, as a lot of women have been looking for a way to restore their look, especially when going through a hair loss due to certain illnesses like cancer. You can also find tens of blogs lovingly written by bald girls like me, stories of success that can help you and inspire you into a change you probably would have struggle to deal with alone.

while the owners of said website took it upon themselves to be a personal coach that you can see, talk to and place your trust with.

There's a difference between patching up a pair of jeans and buying new one!

Sorry if I’m being honest here.

One of the bad trips I often notice on bald faces, is their way of “covering up” the fact that they have lost their hair. I mean you don’t have hair and you use a piece of fabric as big as an plate matt to cover your head; you don’t have eyebrows and you draw two hard lines and two curved lines…who do you think you look like, Marlene Dietrich?

If this is you putting effort to look like you used to before you got bald, you might want to not to do anything at all, because the result not only doesn’t make you what you were, but it worsen the first impression that people have of you and puts you at the center of pity attention nobody would like to be at!

Take a second to think about it: whenever there’s a patch over a pair of jeans, that will be the first thing you notice, while with a new style people will just tell you how good you look today!

When my hair was gone, I felt like I had lost my identity. That is the value my hair held to me back then. Lost all at once. And that’s exactly what I needed to find: I needed to look at myself in the mirror finding a person I would recognize, not certainly finding dear Helena Bonham Carter.

You can be like her for one day, but I don’t think this is one of those looks “ONE-FITS-ALL!”

My realization about the use of colors, shapes and volume during years of experimenting turned me into a new person, someone I could rely on and whose look was awesome, no matter the reason I was wearing it!

At that time, there was no one that would tell me what to do to repair the damage, to hide what I was ashamed of having so much in display: that face that wasn’t me, that head that was sick and ugly, that image that strangers, acquaintances, friends and family now saw as “sick”.

I understood that something was wrong when the expression over my parents face changed in shock.

Since then, I could only hear my reflection in the mirror screaming that I was an ugly monster.

My sister was the first one to try and help me, she gave me an eyebrows pencil telling me to draw my eyebrows; she also gave me a black pencil to mark my eyes where the lashes were lacking.

The eyebrows pencil was way darker for me and the black pencil would always melt down and make me look an emo, but hey I was still happy of the result. Now I laugh at that way of patching myself up! I was very young, but that solution helped me a bit anyway.

During the following years I often abused of make-up resulting “too much” or even vulgar, I was hungry to hide my flaws as much as I could, but I didn’t have anyone suggesting me to do otherwise.

What was more important, according to those who cared about me, was for me to resolve the issue with myself from the inside and all things related to my actual image situation, were considered not relevant.

Fortunately, a solution was there to be found.

I remember the day I proudly showed my bald head to the world, 9 years had passed from the beginning of my illness, my teenage years were lost forever to that monster inside me that had left permanent scars both inside and outside my body.

Well. The day my shiny head felt the sun again, I couldn’t feel more beautiful or happy about how I looked.

Even today, when people ask me to show them my bald head (yes this happens a lot) I get a strange feeling inside my stomach, as if shame had left a scar that hurts a little every time this happens, like a small reminder that is there.

When I show it though, I am still proud of myself, for it took me very long to get there.

I could seriously write for hours about the things that happened to me as a bald girl, the emotions I felt in different occasions and the experiences I turned down because I didn’t have the courage to show myself for who I was, but this page is not the right page to talk about it.

This page I am writing because I have decided to:

Would you like a honest friend right now?
find out how life coaching can help you!

If you are going through a change of hair that you weren’t expecting and you feel lost in a jungle of possible options that could help you, my dear you’ve stepped in the right place.

With no guide to navigate the right path to get back on your feet, it can be difficult to find a new image of yourself to adapt to. 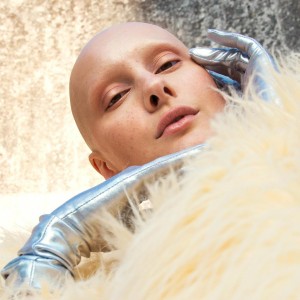 Sara Meucci, aka Miss Swirl, is an eclectic Florentine artist. Born in a family of Tuscan artisans, she currently works in fashion and is the youngest teacher of millinery and history of the Florentine hat in Italy. As a writer, she talks about music, composes texts for her songs and those of other musicians. She is working on the launch of a new project, linked to an important personal event that completely changed the course of her life. The project will be multi-channel and build on photography and the naked body; the art of make-up and fashion accessories, which finally become useful for a specific purpose. Each instrument will be used to represent and encourage all women who happen to find themselves without face or head hair, for different reasons. These tools, combined with the knowledge of the artist, will show women how to discover their bravest self, perhaps even their best self, and find the strength to mirror themselves without fear of not recognizing themselves anymore.